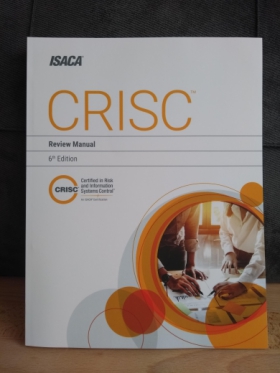 I enjoy learning new things. Everyone who knows me can attest to that. I also have fun taking tests and quizzes. So it’s not a surprise that I always try to find ways to combine these two activities.

I have pursued one academic degree per decade (approximately). I got my BSc in 1993, my MSc in 2000 and my MBA in 2007. Maybe it’s time for another academic degree, but it’s getting more and more difficult due to time constraints and, of course, the fact that I’m getting old. Not to mention the cost.

In 2013 I moved to Prague and I changed my habits. I focused on short continuing education courses offered by University of Leicester (Leadership, 2014) and MIT Management Executive Education (Negotiations, 2017), not to mention the numerous Coursera (such as Behavioral Economics and Critical thinking) and Lynda courses.

Somehow I think it’s time to get back to professional certifications again, so I bought the book for CRISC and I will start studying during my planned vacations - pretty much the only time I can dedicate to studying any more.